This article is about assets in England and Wales that are your legal entitlement. You can only bequeath things that you truly own. Because if you try to include anything else, the rightful owner could challenge your will and even overturn it completely. You should ponder carefully before deciding who gets the proceeds of your English and Welsh assets when you die.

Specialist Advice from the Pen of Jeffrey Avery

Jeffrey Avery is a specialist valuer of movable collectables. His work takes him into homes of deceased estates, where survivors ask him to arrange home clearances of unwanted items. They tell him they prefer to pay his slightly higher, yet still reasonable rates. Rather than take chances with fly-by-night tippers, and find the items dumped on open land alongside abandoned household waste.

General Principles of Ownership and Wills

Ownership is a state whereby a person, or legal entity has exclusive rights and control over an asset. Assets could be land, improvements, intellectual property, an interest in income from something, or loose gear. Disputes can arise where ownership is not documented in some generally accepted way.

Therefore, you should resolve any uncertainties with affected third parties while you are alive.  And especially before you draft a will defining who gets the proceeds of your English and Welsh assets after your death.

What Makes an English or Welsh Will Legal

Beyond that, your will is legal, and a valid way to bequeath legal entitlements if it meets all the following requirements:

1… You are over 18 when you sign and do so voluntarily.

2… You commit your will to paper while you are of sound mind.

3… You sign your will in the presence of two witnesses over 18.

4… Those two witnesses sign your will in your presence. 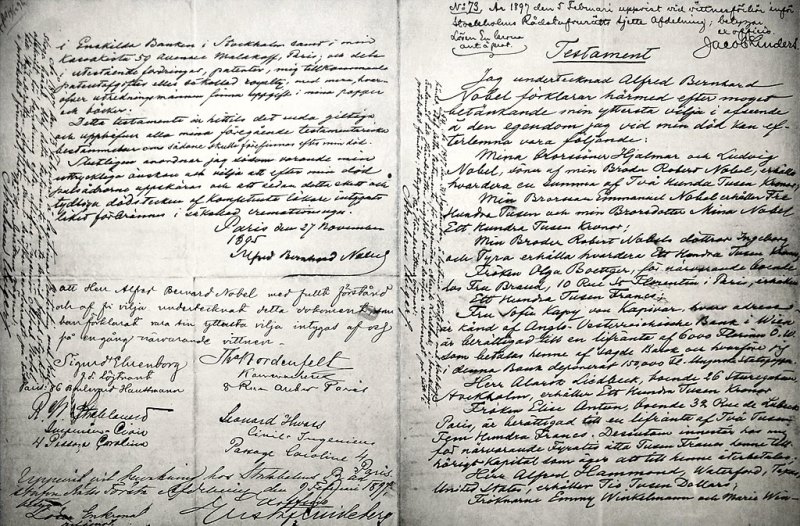 Grounds for Contesting a Will in England and Wales

Unfortunately, signing a will is not always a cast-iron guarantee who inherits the proceeds of your English and Welsh assets. The law generally respects the rights of people making wills – even strange ones – but there are exceptions.

Those exceptions often revolve around the ‘true intentions’ of the person making the will. For if, logically speaking the document fails to reflect those, then how can we be sure it is what they really wanted?

Moreover, there are also cases where an executor fails to carry out the intent of the will, at least according to aggrieved complainants. But there is a third factor too under English and Welsh law. This says a person previously receiving financial support from the deceased, is entitled to ‘reasonable financial provision going forward.

Grounds for Contesting a Will in England and Wales

A person claiming an ‘interest in a will’ over Welsh and English assets may challenge its validity for one, some or all of the following reasons:

1… The person signing the will lacked mental capacity.

2… Someone unduly influenced or coerced their decisions.

3… The will was made without their knowledge and approval.

5… The document is a forgery or constitutes fraud.

What Happens If a Challenge to a Will is Successful?

The Probate Court hearing the dispute may broadly speaking reach one of three conclusions:

1… The complaint is not proven beyond reasonable doubt. The will is therefore valid.

2… The reasoning of the complainant is correct and the will must be amended accordingly.

3… The will is invalid in its entirety. Therefore the laws of succession must apply.

The Laws of Succession in England and Wales

The principles we consider here are largely handed down from centuries ago, when the Church shared estates along blood lines, and helped itself to a commission ‘for the poor’.

The rules as they stand now, dictate a person dying without a valid will leaves everything to their spouse or civil partner. However, this DOES NOT include an unregistered social partner.

If nobody qualifies under this definition, then the proceeds of your English and Welsh assets will pass as follows (assuming the death took place after 6 February 2020). Follow that link above if the death happened earlier than that.

2… There is no spouse or civil partner, but there are surviving children. They share the proceeds equally between them.

4… There is no spouse or surviving relatives, but a parent(s) are alive. The  parent(s) inherit the entire estate in equal shares.

From there onward you’ll need a diagram to work out who could inherit the proceeds of your English and Welsh assets, if you die without a legal will. The following diagram gives a general idea down the line, although for the rights of spouses and civil partners refer above. 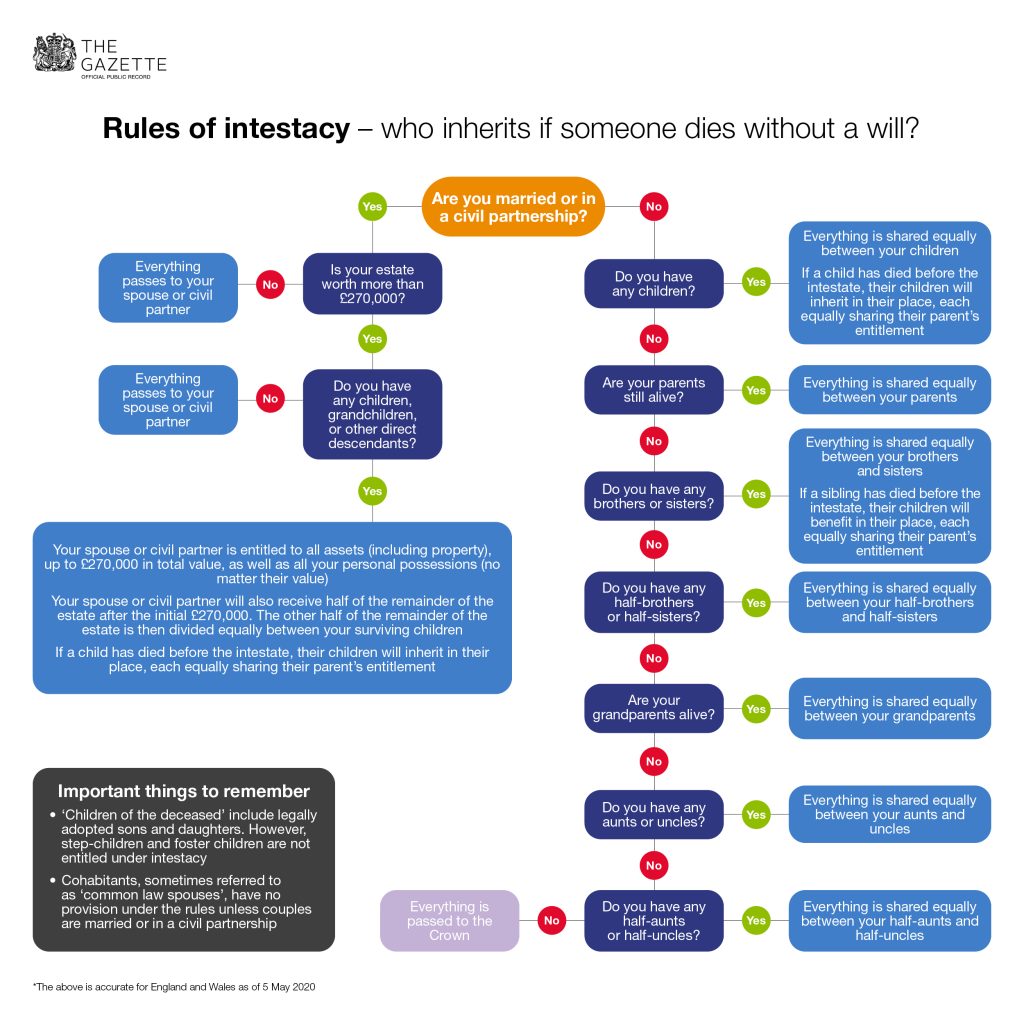 Rules of Succession In England and Wales (The Gazette)

Need Help Sorting an Estate in England or Wales?

Avery Associates provides paralegal services to deceased estates in England and Wales. Our offerings include house clearances and probate valuations. We also provide a wealth of free advice on this blog.

I rarely write reviews but feel given the service I received from Avery Associates it would be appropriate. I was rather daunted at the prospect of dealing with the estate of my deceased uncle and having to organise probate property and contents valuation. Jeffrey had been recommended to me, so we instructed him from the beginning.

He was polite, efficient and assisted us throughout the process. From providing the RICS valuations needed to satisfy HMRC and advising us how best to sell items of value, to clearing and cleaning the property of the remaining items – it was a first rate service. Many thanks again, J.

How to Make a Legal Will That Holds Water

How to Access Medical Records of Deceased Persons in England