It was June 2019 when I was contacted by an executor who was winding up his late father’s estate and had instructed me to carry out a full probate valuation of the house contents and chattels. This was a substantial property in North London close to Hampstead Garden Suburb and set in 1/4 acre of beautiful mature gardens, which contained Victorian statuary and lovely wrought iron garden furniture. Three cars occupied the large garage and driveway which I also valued and included in the probate contents valuation.
The house itself was furnished with an abundance of good quality antiques and collectables along with a large amount of Antiquarian books covering many interesting subjects. But it was in the front garden tucked away in a corner that the rare ship’s cannon was situated. Not a particularly valuable canon nevertheless I valued it at £500 for probate purposes and IHT calculations.
Following the chattels we were instructed to clear the entire property of its contents, the grounds and all the vehicles all of which was completed in 2 days by our team.
You may find the information below an interesting read so please enjoy it. 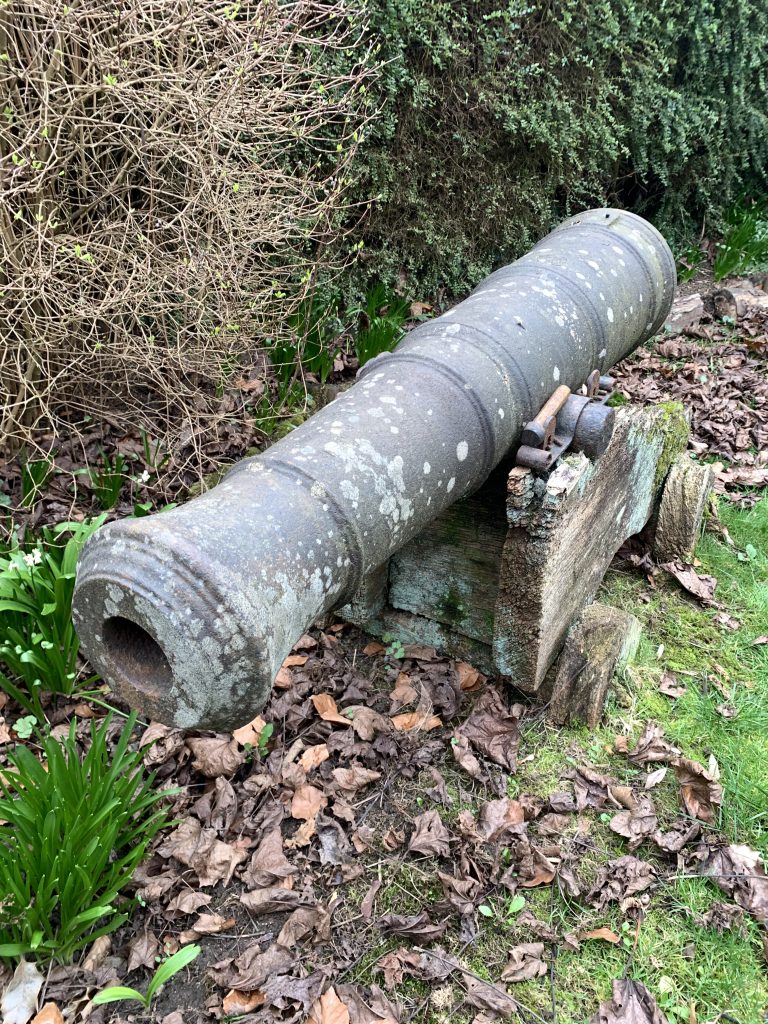 Firing a naval cannon required a great amount of labour and manpower. The propellant was gunpowder, whose bulk had to be kept in the magazine, a special storage area below deck for safety. Powder boys, typically 10–14 years old, were enlisted to run powder from the magazine up to the gun decks of a vessel as required.

A typical firing procedure follows. A wet swab was used to mop out the interior of the barrel, extinguishing any embers from a previous firing which might set off the next charge of gunpowder prematurely. Gunpowder was placed in the barrel, either loose or in a cloth or parchment cartridge pierced by a metal ‘pricker’ through the touch hole, and followed by a cloth wad (typically made from canvas and old rope), then rammed home with a rammer. Next the shot was rammed in, followed by another wad to prevent the cannonball from rolling out of the barrel if the muzzle was depressed. The gun in its carriage was then ‘run out’; men heaved on the gun tackles until the front of the gun carriage was hard up against the ship’s bulwark, the barrel protruding out of the gun port. This took the majority of the gun crew manpower, as the weight of a large cannon in its carriage could total over two tons, and the ship would probably be rolling.

The touch hole in the rear (breech) of the cannon was primed with finer gunpowder (priming powder) or from a quill (from a porcupine or the skin-end of a feather) pre-filled with priming powder, then ignited.

The earlier method of firing a cannon was to apply a linstock, linstocka wooden staff holding a length of smoldering match at the end—to the touch-hole of the gun. This was dangerous and made accurate shooting difficult from a moving ship, as the gun had to be fired from the side to avoid its recoil, and there was a noticeable delay between the application of the linstock and the gun firing.[1] In 1745, the British began using gunlocks (flintlock mechanisms fitted to cannon).

The gunlock, by contrast, was operated by pulling a cord or lanyard. The gun-captain could stand behind the gun, safely beyond its range of recoil, and sight along the barrel, firing when the roll of the ship lined the gun up with the enemy, and so reduce the chance of the shot hitting the sea or flying high over the enemy’s deck.[1] Despite their advantages, gunlocks spread gradually as they could not be retrofitted to older guns. The British adopted them faster than the French, who had still not generally adopted them by the time of the Battle of Trafalgar (1805),[1] placing them at a disadvantage, as the new technology was in general use by the Royal Navy at this time. After the introduction of gunlocks, linstocks were retained, but only as a backup means of firing.

The linstock slow match or the spark from the flintlock ignited the priming powder, which in turn set off the main charge, which propelled the shot out of the barrel. When the gun discharged, the recoil sent it backwards until it was stopped by the breech rope, a sturdy rope made fast to ring bolts let into the bulwarks, with a turn taken about the gun’s cascabel (the knob at the end of the gun barrel).

A typical broadside of a Royal Navy ship of the late 18th century could be fired 2–3 times in approximately 5 minutes, depending on the training of the crew, a well trained one being essential to the simple yet detailed process of preparing to fire. The British Admiralty did not see fit to provide additional powder to captains to train their crews, generally only allowing ​1⁄3 of the powder loaded onto the ship to be fired in the first six months of a typical voyage,[citation needed] barring hostile action. Instead of live fire practice, most captains exercised their crews by “running” the guns in and out, performing all the steps associated with firing but without the actual discharge. Some wealthy captains, those who had made money capturing prizes or who came from wealthy families, were known to purchase powder.