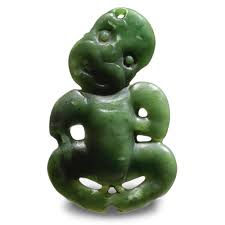 The reasoning behind the first idea is formed when we know that often the Hei-Tiki was buried with their kaitiaki (guardian) after death then found again in a special place and time of afterlife possibly named tangihanga (mourning and associated activities). Hei-tiki were very often given women if she was having trouble conceiving by her husband’s family

Hei-tiki carved from pounamu (nephrite or bowenite) are the most valuable. Pounamu is admired enormously by Māori for its beauty, and great hardness and this toughness lead to its use in making tools and weapons.

Hei-Tiki’s are now very valuable and examples can be found in museums all over the world some worth as much as £20,000. The Museum of New Zealand Te Papa Tongarewa has over 200 examples followed by The British Museum who boast another 50 examples making these the two largest collections in the world. Its known that Sailors and European travellers received them as gifts when the two cultures made the first and earliest contact

The wearing of such items for many Māori relates to their cultural identity, and they are also popular with young New Zealanders of all backgrounds for whom the pendants relate to a more generalized sense of New Zealand identity. Several actors recently appearing in high-profile movies filmed in New Zealand have returned wearing such jewellery, to include Viggo Mortensen “The Lord of the Rings” who took to wearing a hei matau. These trends have contributed towards a worldwide interest in traditional Māori culture and arts such as Kiri Nathan including pounamu jewellery in her 2013 London Fashion Week exhibition

The Captain of the battle cruiser HMS New Zealand constructed in 1911 by the government of New Zealand for the defence of the British Empire and which took an active part in three battles of the First World War, wore into battle a hei-tiki (as well as a piupiu, Māori warrior’s skirt). The crew attributed to this the New Zealand being a “lucky ship” which sustained no casualties during the entire war.