Valuation Of Hand Made Rocking Horse

In a recent probate valuation in Kendal Street, Westminster W2 2BU our probate valuers report includes a late 20th century hand made rocking horse valued at £300 for he purposes of probate. 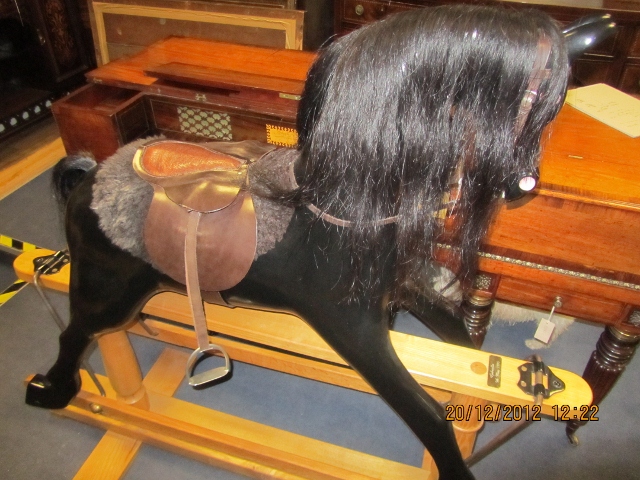 History Of The Rocking Horse

Making horses into children’s toys has been a pastime for many hundreds of years worldwide. It is known that hobby horses existed in Persia as well as ancient Greece around 400BC. In the 1300’s, with the Age of Chivalry, wheeled horses were made for children to re-enact jousting games and by the mid nineteenth century many pull-along horses were made in England, Europe and America.

The earliest known arrival of the rocking horse was half-moon shaped with boarded sides and log body between the two rockers and a very naive head. It is believed that it may have derived from the cradle. The earliest one known to still exist is said to have belonged to King Charles I and dates from C1610. This type of rocking horse was developed through the next couple of centuries with the heads and bodies becoming more sophisticated and ornately carved and painted.

The horse on bow rockers that we know and love today was a product of eighteenth century England. It was popular with the wealthy and it is said they were used to help develop children’s’ balance for riding real horses.

Spotted rocking horses started to appear in the late eighteenth, early nineteenth centuries and they were usually white with black spots. The white/grey background with black dappling appeared later. Horses were carved, roughly rasped and then covered with gesso which was also known as whitening and looks like plaster. This was far easier to rub down than the wood itself and gave a very smooth finish on which to paint. However, it was a very time-consuming process whereby the gesso was applied hot, in multiple coats, with sanding in-between. Each coat could take up to 10 hours to dry.

The safety-stand was an American invention patented in England in 1880 by Philip Marqua. Surprisingly this patent was not renewed and now anyone can make horses on safety-stands. By the early 20th century the safety-stand horses became far more popular than the bow rockers mainly because so much less space was required to ride the horse and they gave a shorter, more controlled ride for children.

The most well known and sought after of the antique rocking horses were made by F.H Ayres who was based in London from the 1860’s also making sports goods and board games. Their rocking horses, on both bows and safety-stands, were sold through major outlets such as Harrods and Selfridges and often bore the shop’s name on the base of the stand. Other well-known makes from the late 19th century and early 20th century include J&G Lines, G&J Lines, Lines Bros. Wilson, Collinson and Leeway.

It wasn’t until the advent of modern technology that the natural wood horses became possible and very popular. Without modern technology wood is far too time-consuming to rub down by hand (which is why gesso was always applied and then painted). However we now have the tools to rub down curved and intricate shapes far more easily enabling us to achieve a very fine surface for the creation of beautiful, tactile, polished finishes.