Valuation Of Arts And Crafts Sideboard For Probate Purposes

In a recent probate valuation in Adelaide Road, Southall UB2 our probate valuers report includes a superb Shapland and Petter arts and crafts sideboard valued at £800 for the purposes of probate. 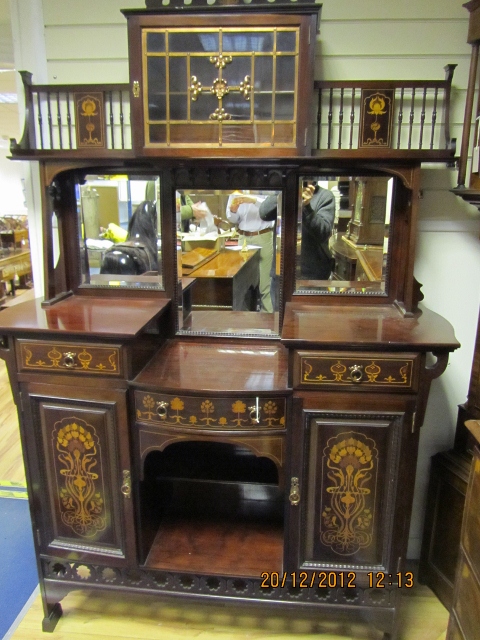 The History of Shapland and Petter

The Museum of North Devon in Barnstaple have an archive of Shapland and Petter which includes some company records and a small display of furniture and related items. The following text gives history of the company and is reproduced from the display boards in the museum with kind permission of North Devon Museums.

For over 100 years the Shapland and Petter factory has stood at the end of Barnstaple Long Bridge. Manufacturers of doors, door sets, and custom wood interiors, NT Shapland and Petter Ltd are still one of the towns largest employers. The company was established by Henry Shapland (b. 1823), a cabinet maker by trade. He embarked on a voyage to America in 1848, where he was inspired by an invention for a wave-moulding machine. He was only allowed to see it if he left the country immediately. Returning home with only rough notes, he reproduced the machine and in 1854 began a cabinet making business in one room at the Raleigh woolen mill in Pilton. Later the firm moved to Bear Street in Barnstaple. Henry Petter was an accountant who entered into partnership with Mr Shapland. The business progressed and in 1864 they bought the Raleigh Factory where Shapland first began his work. Success was rapid, but in 1888 the building burnt down. Immediately work began on a bigger and better factory – their present site by the Long Bridge – which included many modern inventions.
The Shapland and Petter Cabinet Works in Barnstaple. The Shapland and Petter Cabinet Works in Barnstaple.

The two Henrys died within two years of each other – Petter in 1907 and Shapland in 1909. In 1924 Shapland and Petter merged with the Barnstaple Cabinet Company, producing North Devon’s biggest industry. During the First World War Shapland’s skilled craftsmen turned their hands to wooden propellers for the aircraft of the Royal Flying Corps. After the war, public tastes changed, and hand carved furniture was too expensive for many. Shapland’s output now included elegant veneered pieces with smooth Art Deco lines. The company fitted out Pullman carriages and ocean liners and made hand-carved church furniture. The famous England Rugby Captain W. W. Wakefield was appointed Company Director in 1927. Throughout the depression of the late 1920’s and early 1930’s the company still managed to produce high quality work.

As cabinet makers, Shapland and Petter employed up to 350 people at a time. There were designers, carvers, cabinet makers, machinists, polishers, and labourers. The company was one of the first to install American labour-saving devices and was keen to adopt the most up-to-date machinery.

The fire of 1888 at the Raleigh Cabinet Works was a huge loss for the company. But it resulted in a new factory which was altogether more modern and better equipped. The new building by the river was arranged into blocks. The production line began with the saw mills and ended with the finishing rooms. There was modern machinery in every department – one of their saws was the first of its kind in Britain. Water sprinklers and electric lights were a necessity – this factory would not burn down.

As well as the furniture production, Shapland and Petter imported timber by sea and rail. The new factory ‘s facilities were exceptional.

Shapland and Petter were renowned for excellent design and workmanship. The carvers were highly skilled, serving seven year apprenticeships and attending classes at the Barnstaple School of Art. Ornately carved furniture required up to a hundred tools.

The factory produced made to order woodwork for banks, hotels, and shops; mantelpieces, paneling and staircases. They fitted out Pullman railway carriages, the London Guildhall, and Edgar Wallace ‘s dining room as well as houses like Tapeley Park in North Devon.

Much of the work involved intricate leaded glass panels, or inlaid fruitwood designs, like the white bedroom suite shown in the exhibition here. This type of work is typical of Art Nouveau 1895 to 1910, inspired by the fluid shapes of plants and flowers.

Many pieces were made from standard designs. There were hundreds to choose from, and a selection could be seen in local and London showrooms and in catalogues. Although mass-produced, this furniture was well-made by skilled technicians and modern machinery.