In a recent probate valuation in Church Avenue, Middlesex HA4, our probate valuers report includes a Vintage tin metal toy truck valued at £30 for the purposes of probate.

Chattels Valuations Throughout Middlesex And London 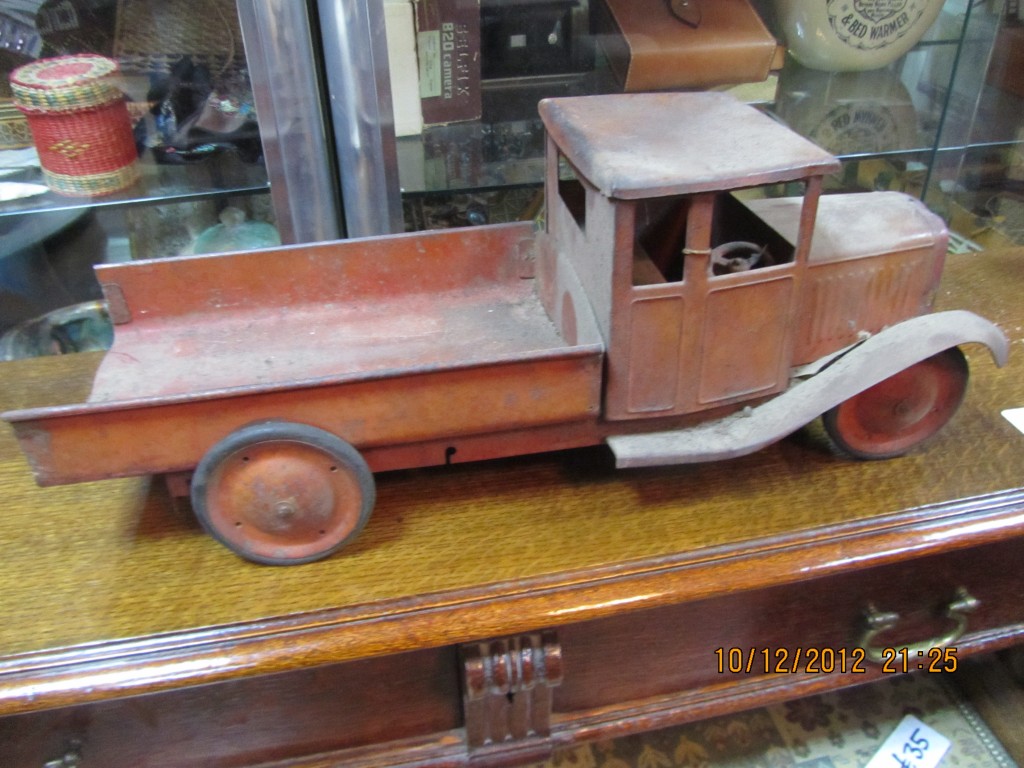 The History Of Tin Plate Toys

Tin toy collecting has continued to be an exciting tradition thoughout history. Beginning as early as the 1800′s, many tinplate toys came from German companies. Some of those notable companies included Bing (1863), Fleischman (1887), Lehmann (1881), Gunthermann (1880) and Marklin (1859). These companies developed and set the high standards for the German tinplate industry. Later, as the interest in tin toys continued, other German manufacturers such as Arnold (1906), Tipp & Company (1912), Schuco (1912) and Levy (1920) continued to carry on the tin toys tradition.

With the growing interest in tinplate toys, Other European companies began to surface: Rossignol factory in France, and the British Chad Valley, a Company first established in 1823 trading under the name of “Chad”. The British companies continued to flourish after WWI when the British public shunned most all German products.

Some of the other reputable British tin toys manufacturers were Lines Brothers Limited (1919-1983), later known as Triang, producing a wide range of tin toys and wooden toys. Louis Marx, an American Company with a British subsidiary (1932-1961) produced a huge variety of unusual novelty items, including some tinplate toys. The Mettoy (Metal Toys) Company Limited (1933) flourished as it supplied toy lorries and aircraft to Mark Spencer Stores. After WWII the Company diversified into the first small plastic toys, leading on to Corgi’s, which went into production in 1956. Brimtoy (1914 1932) merged with Wells in 1932 to become Wells-Brimtoy Limited. Known for producing a vast selection of high-quality tinplate items, some of which are very unusual and highly collectable today, such as their clockwork fish (1954), flying Superman (1957), dancing Fairy Queen (1954), Mickey Mouse drawing tutor (1955) and walking pig and jumping kangaroo (1945).

The Japanese tin plate toys first appeared in the Meiji and Taisho era. Japan also had been a major producer of tin toys for as long as the Europeans, but it was not until the late 1940′s, 50′s and 60′s that tin toys production reached its height. Around 1874-1875, imported tin plate was mostly used for oilcans. However, increasing numbers of imported tin plate toys from Germany brought about Japan’s entry into the tin plate toy business. At that time, while Germany provided state of the art tin plate toys that included trains and boats, Japan crafted conventional tin plate toys such as rattles, Jinrikisha (rick shaw), and kamenoko. Initially, the tin toy business in Japan did not fair well until the Sino-Japanese war of 1894, when the tin toys business started picking up. With the introduction of printing machines for the tin plate, and the technology of clockwork from Germany, Japan’s tin plate industry accelerated. Eventually, Japan became the reputable tinplate tin toy producing center, leaving behind Germany in the aftermath of World War I.

The United States also has a long history of tin toy manufactures dating back to 1850, when there were at least fifty toy makers in the United States. The bulk of this group operated in and around Connecticut, but a notable exception was Francis, Field, and Framis of Philadelphia. Also known as the Philadelphia Tin Toy Manufactory, this organization is the first toy manufacturer of record in America, and was making toys as a business at least as early as 1838. Other notable American companies of the period 1850 -1885 included the George W. Brown Company of Connecticut, James Fallows and Company of Philadelphia, and Bergmann and Company of New York. They were followed by the Ives Corporation in Bridgeport, Connecticut, and the Leo Schlesinger Company of New York. Brooklyn’s Buckman Manufacturing Co. produced its first early version of a steam-powered tin toy around 1872. A pre and post WWII tin toy manufacture, Unique Art Mfg. Co. founded 1916, produced a wide range of entertaining mechanical tin toys and vehicles. The Strauss Company, founded in 1918 and located in East Rutherford, New Jersey, had a very interesting history in the tradition of tin toys. Ferdinand Strauss, from Alsace, France, was a toy importer in the early 1900′s. During the World War I embargo of German toys, Strauss began producing his own. Strauss also employed Louis Marx and continued to produce a variety of wind-up toys in the United States until 1942.

The tradition of tin toys making also continues in India. Rattandeep Enterprises currently operates a plant were craftsmen, dedicated to the old custom of making tin products by hand, produce various styles of steam powered putt putt boats. Amazingly they have no electric or pneumatic powered presses or cutting machines. All of the lithograph work is done by hand as well; including assembly on hand operated arbour presses.

Since the Cultural Revolution period for China began in the 1970′s, China has assumed the role of the leading tin toy maker in the world. The history of Chinese toys (not folk toys) started as early as 1908. The first celluloid toy factory and tin toy factory started around 1910. After the demise of the Japanese tin toy industry in the 1960′s China has grabbed the market. Often in the past Chinese tin toys were noted for their cheap prices, which negatively reflected on their quality. Nowadays, with the continued demand for tin toys, China has elevated itself to a much higher quality standard, while retaining the edge of being very affordable. China produces a wide range of reproduction tin toys with new ones being continually introduced to the market each year.

Some of the finest, most expensive and highly sought-after toys today are made from tin. The range is hugely diverse, covering pull-along, clockwork, wind up, battery-operated, friction cars, trains, planes, boats, animals – in fact the manufacturers have been enormously enterprising in the variety of toys they make.

There has recently been a resurgence in tin toy popularity with the advent of the Internet and increased availability of both vintage and newly manufactured tin toys. Now is the time to pay attention, and explore the fantastic history of tin toy making…

Tin Toys continue to be fun and exciting. Let’s all hope this tradition of talented craftsmanship lives on for generations to come…