In a recent probate valuation in Fitzroy Close, London N6, our probate valuers report included a nice set of oak farmhouse chairs valued for probate purposes at a figure of £200.00 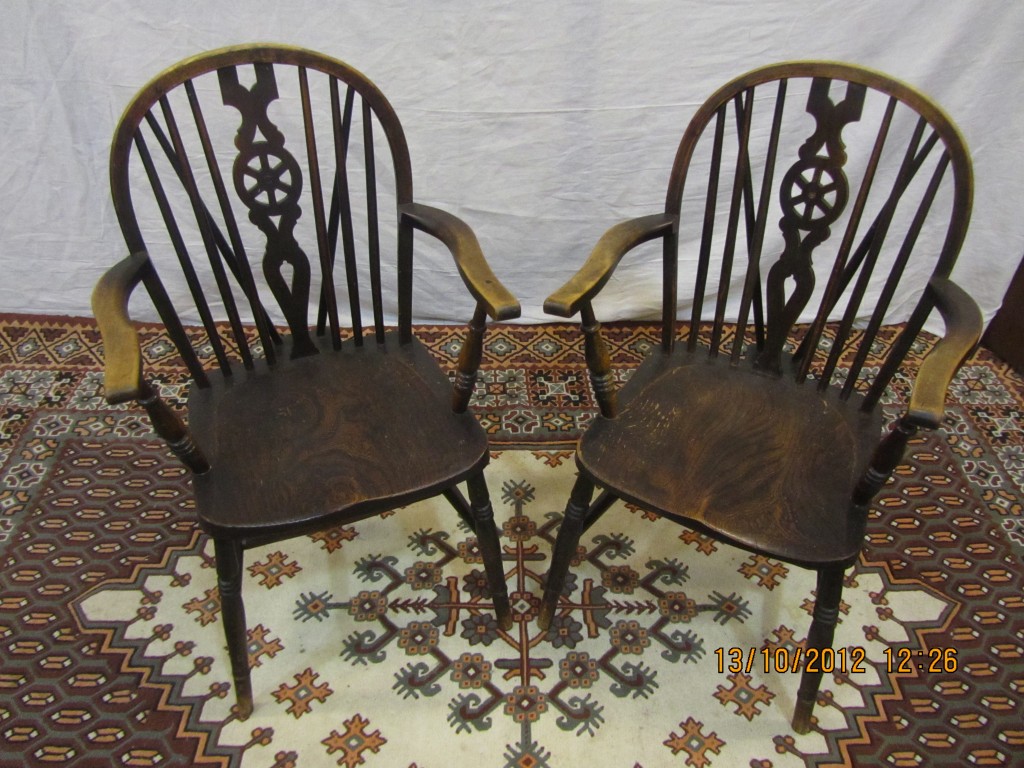 Photo Of Oak Farmhouse Chairs In Highgate Valuation For Probate

In the 16th century life became more comfortable for the wealthy. Furniture was more plentiful than in the Middle Ages but it was still basic. In a wealthy home it was usually made of oak and was heavy and massive. 16th century furniture was expected to last for generations. You expected to pass it on to your children and even your grandchildren. Comfortable beds became more and more common in the 16th century and increasing numbers of middle class people slept on feather mattresses rather than straw ones.

In the 16th century chairs were more common than in the Middle Ages but they were still expensive. Even in an upper class home children and servants sat on stools. The poor had to make do with stools and benches.

During the 16th century glass windows became much more common. However the poor still had to make do with strips of linen soaked in linseed oil.

Chimneys were also a luxury in the 16th century, although they became more common. Poor people simply had a hole in the roof to let out the smoke.

In wealthy Tudor houses the walls of rooms were lined with oak panelling to keep out drafts. People slept in four-poster beds hung with curtains to reduce drafts. In the 16th century some people had wallpaper but it was very expensive. Other wealthy people hung tapestries or painted cloths on their walls.

None of the improvements in 16th century furniture applied to the poor. They continued to live in simple huts with one or two rooms (occasionally three). Smoke escaped through a hole in the thatched roof. Floors were of hard earth and furniture was very basic, benches, stools, a table and wooden chests. They slept on mattresses stuffed with straw or thistledown. The mattresses lay on ropes strung across a wooden frame.

Furthermore new types of furniture were introduced in Stuart times. In the mid 17th century chests of drawers became common. Grandfather clocks also became popular. Later in the century the bookcase was introduced.

However all the improvements in Stuart furniture did not apply to the poor. Their furniture, such as it was remained very plain and basic.

In the 18th century the wealthy owned comfortable upholstered furniture. They owned beautiful furniture, some of it veneered or inlaid. In the 18th century much fine furniture was made by Thomas Chippendale (1718-1779). In 1754 he published a catalogue The Gentlemean and Cabinet Makers Director. Another furniture maker was George Hepplewhite (?-1786). In 1788 his widow published a book of his designs The Cabinet Maker and Upholsterer’s Guide, which had a big influence on Regency furniture. Thomas Sheraton (1751-1806) was a cabinet maker. In 1791-93 he published his designs in The Cabinet-Maker and Upholsterer’s Drawing Book. The famous clockmaker James Cox (1723-1800) made exquisite clocks for the rich.

As usual furniture for the poor remained basic and sparse.

Well off Victorians lived in very comfortable houses. (Although their servants lived in cramped quarters, often in the attic). For the first time furniture was mass-produced. That meant it was cheaper but unfortunately this cheap furniture lead to a fall in design standards. To us middle class Victorian homes would seem overcrowded with furniture, ornaments and knick-knacks. However only a small minority could afford this comfortable lifestyle.

In the early 19th century the poorest people slept on piles of straw because they could not afford beds.

In the early 19th century skilled workers usually lived houses with two rooms downstairs and two upstairs. The downstairs front room was kept for best. The family kept their best furniture and ornaments in this room. They spent most of the their time in the downstairs back room, which served as a kitchen and living room. As the 19th century passed more and more working class Victorians could afford this lifestyle.

At the start of the 20th century working class homes had two rooms downstairs. The front room and the back room. The front room was kept for best and children were not allowed to play there. In the front room the family kept their best furniture and ornaments. The back room was the kitchen and it was where the family spent most of their time. Most families cooked on a coal-fired stove called a range, which also heated the room.

This lifestyle changed in the early 20th century as gas cookers became common. They did not heat the room so people began to spend most of their time in the front room or living room, by the fire. Rising living standards meant it was possible to furnish all rooms properly not just one. During the 20th century ordinary people’s furniture greatly improved in quality and design.

In the 1920s and 1930s a new style of furniture and architecture was introduced. It was called Art Deco and it used geometric shapes instead of the flowing lines of the earlier Art Nouveau. The name Art Deco came from an exhibition held in Paris in 1925 called the Exposition Internationale des Arts Decoratifs.

In the late 20th century Britain became an affluent society and standards of furniture for ordinary people continued to rise.

Two famous furniture designers of the 20th century are Ron Arad (1951-) and John Makepeace (1939-).
Our valuers always carry out extensive research, so by having our RICS probate valuation we will ensure that the chattels are not under or overvalued.