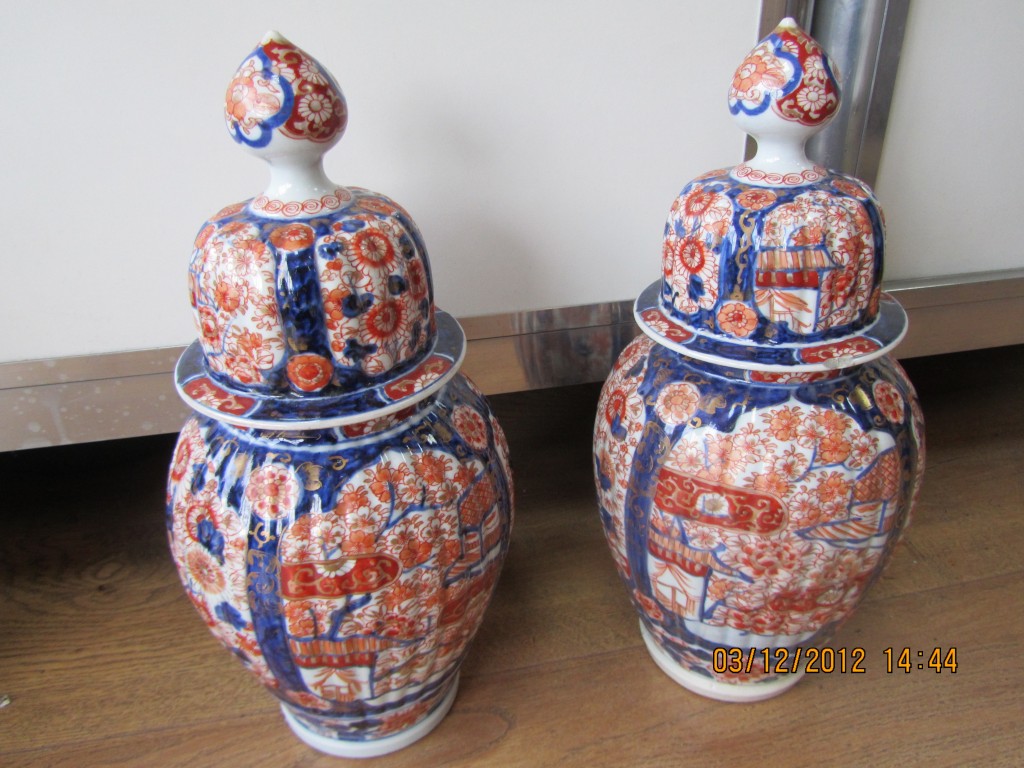 Photo Of Imari Vases In Fulham Valuation For Probate

During the Sengoku period (1477-1573), the feudal lords in Japan struggled in constant armed conflicts of each other. At the same time, among these samurai worriers, tea ceremony became popular besides fighting. Expensive Chinese and Korean ceramics were collected along with their tea utensils. In Japanese tea culture known as sado or chanoyu, an appreciation of the objects of art for the use in the ceremony is most essential into true connoisseurship. Oda Nobunaga (1546-1582), who became very close to unify the country under his power, was particularly interested in chanoyu and owned many rare objects in his collection. After Nobunaga tragically ended his life in fire at the Honoji Temple, attacked by his own samurai, Akechi Mitsuhide, Toyotomi Hideyoshi(1536-1598) became a ruler of Japan. Hideyoshi, who had established this tea ceremony as a display of high ranking status in the feudal hierarchy, started to extend his ambition towards China. During his reign, Hideyoshi sent his army to Korea, known as Bunroku & Keicho Campaigns (1592-98). The lord Nabeshima of Saga joined the campaigns under Hideyoshi’s order. During the invasion of Korea, many potters and craftsmen were captured and brought back to Japan by them. In the early 17th century, it is said that these Korean potters discovered kaolin in Arita and started to make porcelain wares for the first time in the Japanese history. This Hideyoshi’s foreign war is known to people as “Chawan Senso” which can be translated to Tea Cup War.

Imari porcelain was first potted at Arita Sarayama in the 1610’s. In Japanese, Sarayama refers to an original, or an ancient site where porcelains or the potteries were made. In the early 17th century, these porcelain products were brought to the port of Imari just to the north of Arita for the trade. As popularity and demand for Imari grew, more and more kilns were built in Arita Sarayama and before too long other kilns were started all over the province of Hizen which included the Saga prefecture and most of the Nagasaki prefecture. In 1637, with a rapid growth of the porcelain industry in the area, Nabeshima Clan started to regulate the local kilns. In the 1640’s, the new technique was introduced which allowed porcelain makers to decorate with more colors including red, green, yellow and purple. This type of the porcelain is called Akae or Iroe. Around this period, China was entering political power struggles caused by the rebels. In 1644, Beijing was invaded and the Ming dynasty was ended. Since China’s porcelain trade was disrupted due to the turmoil, the Dutch East India Company (VOC) which developed the trade between East Asia and Europe sought its placement
in the Imari products. Many stunning vases and large chargers were brought to Europe to decorate king’s castles. And also colorful bowls and plates were shipped out to Osaka and Edo where the culture of the wealthy merchants was flourishing. The word “Imari” became the name which stands for the beautiful high quality porcelain known to the whole world.