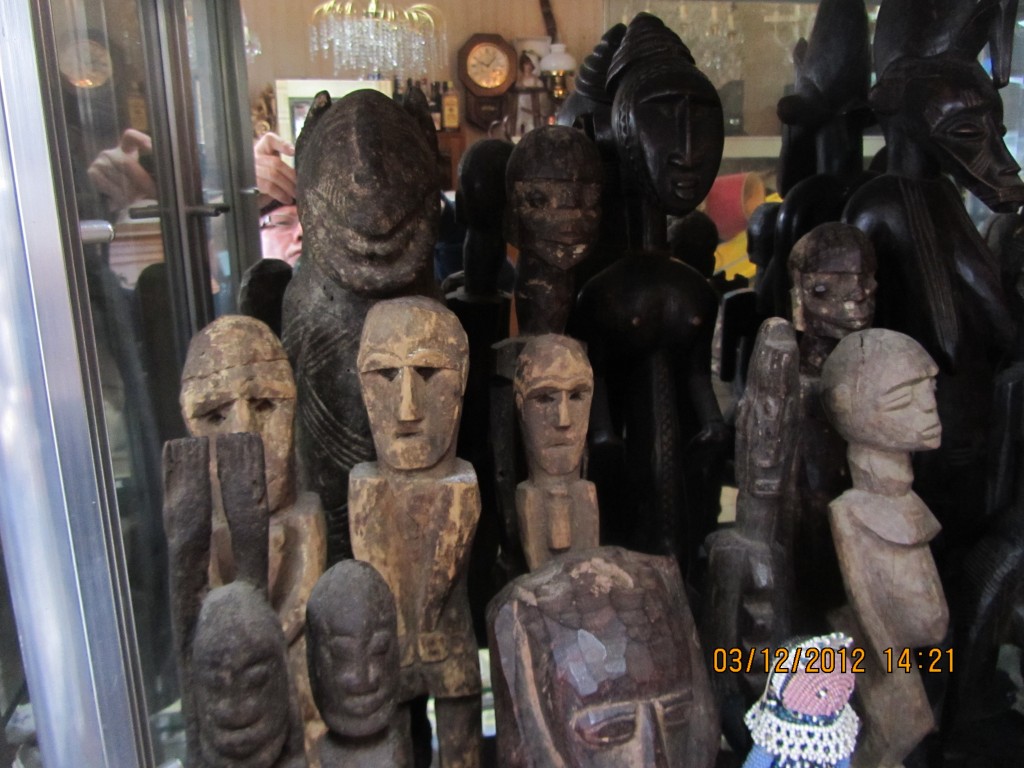 Photo Of Tribal Art Collection In Dulwich Valuation For Probate

Dogon art is extremely versatile, although common stylistic characteristics – such as a tendency towards stylization – are apparent on the statues. Their art deals with the myths whose complex ensemble regulates the life of the individual. The sculptures are preserved in innumerable sites of worship, personal or family altars, altars for rain, altars to protect hunters, in market. As a general characterization of Dogon statues, one could say that they render the human body in a simplified way, reducing it to its essentials. Some are extremely elongated with emphasis on geometric forms. The subjective impression is one of immobility with a mysterious sense of a solemn gravity and serene majesty, although conveying at the same time a latent movement. Dogon sculpture recreates the hermaphroditic silhouettes of the Tellem, featuring raised arms and a thick patina made of blood and millet beer. The four Nommo couples, the mythical ancestors born of the god Amma, ornament stools, pillars or men’s meeting houses, door locks, and granary doors. The primordial couple is represented sitting on a stool, the base of which depicts the earth while the upper surface represents the sky; the two are interconnected by the Nommo. The seated female figures, their hands on their abdomen, are linked to the fertility cult, incarnating the first ancestor who died in childbirth, and are the object of offerings of food and sacrifices by women who are expecting a child. Kneeling statues of protective spirits are placed at the head of the dead to absorb their spiritual strength and to be their intermediaries with the world of the dead, into which they accompany the deceased before once again being placed on the shrines of the ancestors. Horsemen are remainders of the fact that, according to myth, the horse was the first animal present on earth. The Dogon style has evolved into a kind of cubism: ovoid head, squared shoulders, tapered extremities, pointed breasts, forearms, and thighs on a parallel plane, hairdos stylized by three or four incised lines. Dogon sculptures serve as a physical medium in initiations and as an explanation of the world. They serve to transmit an understanding to the initiated, who will decipher the statue according to the level of their knowledge. Carved animal figures, such as dogs and ostriches, are placed on village foundation altars to commemorate sacrificed animals, while granary doors, stools and house posts are also adorned with figures and symbols.

There are nearly eighty styles of masks, but their basic characteristic is great boldness in the use of geometric shapes, independent of the various animals they are supposed to represent. The structure of a large number of masks is based on the interplay of vertical and horizontal lines and shapes. Another large group has triangular, conic shapes. All masks have large geometric eyes and stylized features. The masks are often polychrome, but on many the color is lost; after the ceremonies they were left on the ground and quickly deteriorated because of termites and other conditions. The Dogon continue an ancient masquerading tradition, which commemorates the origin of death. According to their myths, death came into the world as a result of primeval man’s transgressions against the divine order. Dama memorial ceremonies are held to accompany the dead into the ancestral realm and restore order to the universe. The performance of masqueraders – sometimes as many as 400 – at these ceremonies is considered absolutely necessary. In the case of the dama, the timing, types of masks involved, and other ritual elements are often specific to one or two villages and may not resemble those seen in locations only several miles distant. The masks also appear during baga-bundo rites performed by small numbers of masqueraders before the burial of a male Dogon. Dogon masks evoke the form of animals associated with their mythology, yet their significance is only understood by the highest ranking cult members whose role is to explain the meaning of each mask to a captivated audience.
Our valuers always carry out extensive research, so by having our RICS probate valuation we will ensure that the chattels are not under or overvalued.