In late July I was asked to carry out house contents valuation for probate by a local probate solicitor and met him and his joint executor at the property in question situated in Ladbroke Grove, Kensington. We all arrived on time and found our way to the 4th floor and proceeded to an apartment at the rear of the block. The apartment only one bedroom, a living room, kitchen and bathroom. there were very little in the way of contents and of very low value, meaning that my valuation was only going to take a short time.

One Item Worth Half Of the Total Probate Contents Valuation

Although the household contents and personal possessions were only worth on an “open Market value” basis about £250, one item a Troika Double Base Vase was worth £250 on its own and doubled the value of the probate contents valuation. 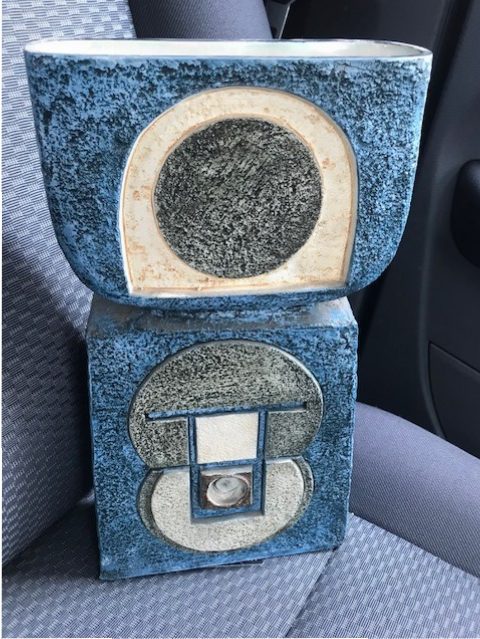 The History Of Troika

Troika was set up in February 1962 by Leslie Illsley, Jan Thompson and Benny Sirota who took over the Powell and Wells Pottery at Wheal Dream, St Ives, Cornwall, where Benny Sirota had previously worked.They wanted to pursue their vision of pottery as art, without regard to function. This ran counter to the aims of much of the studio pottery movement at the time, as epitomised by the work of Bernard Leach. They initially relied on the ceramics of Leslie’s wife, Caroline (Kingston School of Art). This included the novel double egg cup.

The venture rapidly became successful, gaining both critical praise and very high sales through a combination of the summer tourist trade and contracts with department stores such as Heals and Liberty in London. Vases, lamp bases and tableware were made using plaster moulds; tiles and wall plaques were also made in the early years.

The Troika pottery was based at the Wheal Dream site in St Ives from 1962 to 1970, when it moved to Fragden Place in Newlyn. Benny Sirota left in 1980, and with declining sales, the business closed in 1983.

From 19 January to 9 March 2013, an exhibition, Troika 1963-1983, was held at the Penlee House Gallery and Museum Penzance, celebrating 50 years since the inception of Troika, which included a number of prototypes by Leslie Illsley. Benny Sirota attended the opening, and explained the origin of the company’s name: “my grandfather escaped from Russia dressed as a woman on a troika – a sledge with three horses…there were three of us who started the firm – and it just gelled.” – Information obtained and originally written at wikipedia