There was a distinct Chinese theme in the Kensington property where I carried out my most recent probate contents valuation. And after talking to the son of the deceased I found out that his Father had worked in China for 15 years back in the 60’s. This explained why there was a lot of Chinese art and ceramics distributed around the house. I noted some very nice pieces of furniture to include a lovely lacquered and inlaid cabinet in the lounge and various other chinoiserie pieces. As well as the nice Asian item there were some very fine pieces of Georgian furniture all of which were included in the house contents valuation for probate purposes.

Following on around the house I valued the kitchen contents which included an American double door fridge freezer, farmhouse pine table and chairs, various ceramics on display with glassware. There were a number of Sterling Silver items one piece being a delightful Chinese Export Sterling Silver place card holder dating from the sixties pictures of which I have included. The bedrooms were furnished with the normal type of furniture you would expect but not carrying a tremendous value for the purposes of Probate. The jewellery that was brought back to the property to comply with the house insurance terms was set out on the dining room table and with some nice solid gold and Diamond rings, brooches, some Gold sovereigns all amounted to a healthy £1500 as my probate jewellery valuation. 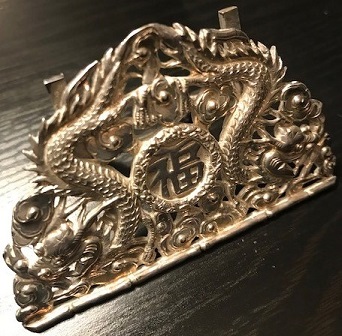 Chinese export silver is objects in silver made in foreign taste for export, mainly to Europe . In the eighteenth and nineteenth centuries, through the Chinese Canton System (Canton Port) and also after that, the opium war, the Treaty of Nanking and Treaty of Tientsin, Chinese Qing Dynasty became a major exporter for fine Chinese goods such as tea, spices and porcelain etc. to Europe, Germany, France, Russia and America. Treaty trading ports were further extended throughout the entire Qing Dynasty’s land.

Historically, silver had been more valuable in China than Europe, relative to gold and other commodities, and European traders had for centuries paid for their purchases of Chinese goods with silver. Now for the first time price levels made the importation of silver objects made for export to Europe attractive. Though the Chinese government had for centuries been content to see renewable or inexhaustible luxury products such as silk or ceramics leave China as trade goods or diplomatic gifts, they had tried to retain as much silver as possible in China. Now they were unable to do this.

Just as the Chinese potters produced Chinese export porcelain for Western consumers, Chinese silversmiths also created elaborately-decorated objects for international clients. Early works of Chinese Export Silver was intended to reproduce or copy objects in European styles. However, in copying the European style or model objects, the Chinese artisans later managed to add to new decorations such Chinese motifs as the dragon, flowers, bamboo and scenes of life at the Chinese court. Blending Western forms with Asian decoration including dragons, bamboo, and Chinese landscapes, these pieces reflect the long-standing cultural and commercial exchange between East and West. Information obtained from Wikipedia About Chinese Export Silver

A one stop shop from beginning to end for myself as a first time executor.From our first call I was confident Jeff not only understood the issues with... Read More

Thank you Ian and it was a pleasure to assist you, we know how hard this process can be trying to find different service providers can be a nightmare so we feel very happy to ease the burden by providing all the services you require from one port of call.RegardsJeffrey Avery

by Sarah Lennie on Avery Associates
House Clearance After Probate

I just wanted to give my feedback I have recently moved my mother from her house and had the difficult task of clearing what was left in her... Read More