A 70-year-old man from Philadelphia was found unconscious at his home surrounded by dead cats, excrement and waste.

Authorities have said the conditions inside the house in the northeast of the city were astounding and nauseating, with the overwhelming stench of rotting animals festering in the sweltering heat.

The smell was made worse by the lack of air conditioning in 90-degree temperatures.
Astounding conditions: Hazmat suits had to be worn by personnel who entered the home as they set about retrieving any living animals that might be present 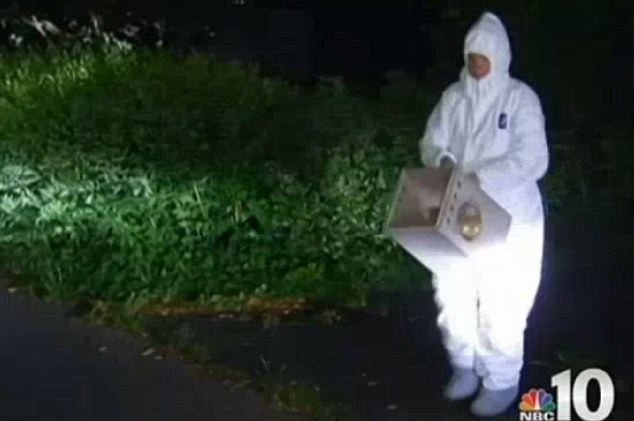 ‘He is alive, but when they walked into the house, it turned out to be a house of horrors,’ said George Bengal, PSPCA’s director of law enforcement to the Daily News.

‘I have never seen a house in my life like this inside. The infestation of parasites in this property and just the overwhelming amount of feces that’s in this property… it’s incredible,’ said Mr Bengal.

The man had lived in the house, on Bickley Street in Bustleton, Northeast Philadelphia, for the past two decades.

The place had become overgrown with trees on the outside and full of garbage on the inside.

It did not have air conditioning and was filled from the floor to the ceiling, with trash and animal waste.

The home was also infested with parasites and vermin. In addition, the roof was caving in and the basement was flooded.

Mr Bengal said that his staff estimated there could be dozens of cats inside.

Another of the cats rescued from the nauseating conditions found inside the home. The 70-year-old man will face charges of animal cruelty
Stench: The man was found surrounded by dead cats, excrement and waste everywhere in 90-degree temperatures

According to the SPCA, there were five living cats, at least three dead cats, buckets of feces, rats and even live bats inside the house.

There were also piles of trash, crumbling drywall and collapsing ceiling titles that made cleanup difficult on the crews and gave cats plenty of potential places to hide.

At least five dead cats, in various states of decomposition, were removed before authorities suspended the rescue operation last night.

Mr Bengal said the flea infestation in the home is one of the worst he has ever seen.

The homeowner, who was not identified, was discovered by family members who then called the emergency services. The man was taken to Nazareth Hospital.

The SPCA will return today to continue to search for the remaining living animals.

Mr Bengal said the presence of bats is a clue that this level of hoarding has been going on for years. The SPCA plans on charging the homeowner with animal cruelty.

A sign has been posted on the door of the home saying it has been deemed unfit for habitation.